While president-elect Donald Trump has been fairly clear and resolved regarding deporting as many as 3 million undocumented immigrants, there are many trying to understand where the Trump administration stands on immigration of skilled labor and how it will impact their specific industry and business. With the nomination of Sen. Jeff Sessions (R-AL) as U.S. Attorney General, we could see further restrictions in the use of work visas, including the H-1B, of which the senator has been critical.

But ultimately, as we look out at 2017, we are sitting in a place where predictions are very difficult to make based on what has been said (or tweeted) and what is actually happening in meetings taking place prior to inauguration.

This article elaborates on one such meeting this past week where many of the biggest names in the technology industry met with Trump and a group of his advisers. These are people like Elon Musk (Tesla), Tim Cook (Apple), Jeff Bezos (Amazon), Sheryl Sandberg (Facebook), Safra Catz (Oracle), Brian Krzanich (Intel), Chuck Robbins (Cisco) and Ginni Rometty (IBM), who all came to make nice and leverage their combined net worth of more than $136 billion to advocate for their businesses and keep free trade benefits and skilled labor import available.

Trump told them that he is open and available to them, anytime.  Their hope is that Trump will lean to the side of, "if it is good for business, then it is good!" At the meeting, Trump seemed open to keeping the high-skilled visa program, a person familiar with the discussion said.

So with that in mind, and knowing that tax cuts are coming, let's go with the prediction that over the next four years, companies will not only continue to leverage the movement of talent but that talent mobility will reach new heights with an ever-increasing volume and variety of movement occurring all over the world.

With a prediction like that, what are mobility managers and directors anticipating for 2017? Buckle up and let's make sure your mobility programs are as efficient and cost-effective as possible!

But behind the cordiality was a sense of trepidation. While technology companies were among the most critical of Trump on the campaign trail, many understand that he will soon hold power over issues critical to them and their shareholders, including government contracts, high-skilled immigrant visas, Chinese imports and trade deals. Trump, both as candidate and president-elect, has used his perch to shame companies, and the consequences haven't been trivial. When Trump tweeted this month that he wanted to cancel Boeing's $4 billion contract to build Air Force One, Boeing's stock price took a hit. Trump has targeted Apple and other companies for manufacturing their products in China, and has called to raise tariffs on Chinese goods, a crucial issue for Silicon Valley companies that import widgets and other hardware components from China. 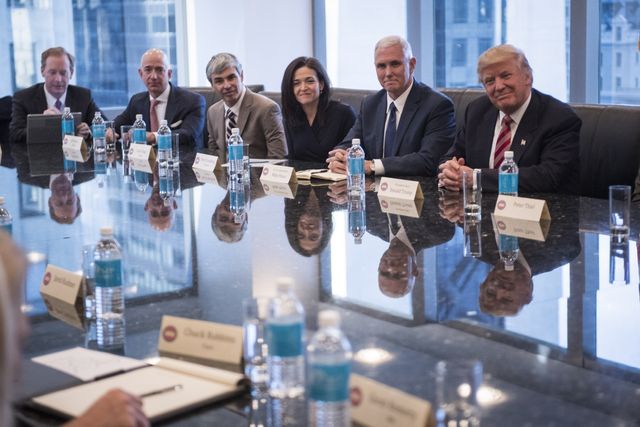