Passport Index, which provides real-time rankings of the world's most powerful passports, has announced a new update for 2017. They give a "visa free score" that represents the number of countries a passport holder can visit visa-free or with visa on arrival.

They have also added a new metric called "The World Openness Score," which tracks the level of freedom of mobility across the globe. The world openness score in 2016 was 17,925. In the first few weeks of 2017, the score has already increased to 17,948. This trend shows opening of borders—but will it continue? With the recent backlash on globalization, the World Openness Score may be in danger of decline.

Überrascht? Well, you shouldn't be, as Germany has taken the lead with a visa-free score of 157.  Here is the new top 10:

Germany takes the lead with a visa-free score of 157. Singapore overtakes South Korea and becomes the highest ranked Asian passport, with a visa free score of 156, coming second. South Korea fell to 6th place (152), while Japan, rose to 4th place, tied with European countries like Italy, Netherlands, Belgium, and others whose visa-free score is 154. Visa-free score represents the number of countries a passport holder can visit visa-free or with visa on arrival. In addition to the popular mosaic of passports, visitors of PassportIndex.org can now see the overall changes to the ranking of countries in 2016. Marshall Islands is on top of the winners' list by adding 35 countries to its visa-free score. Palau, Micronesia, follow with 34 additional countries, while Solomon Islands and Tuvalu added 33. Peru is the biggest winner in South America 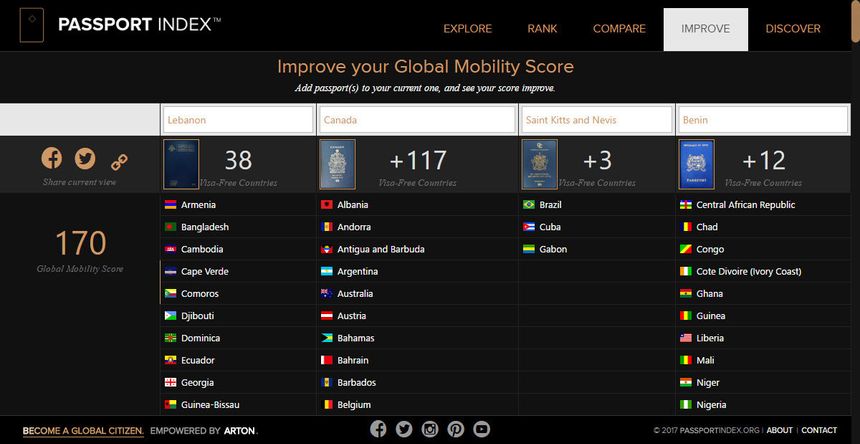