Some credit Confucious for this simple and obvious statement, but for sure Jon Kabat-Zinn wrote a mindfulness book with that as the title. But let's drill in a little on this...why did you go there and was it some place you wanted to go...and if you could go somewhere, where would you go?

More and more often, work can be performed from anywhere. Businesses have been more willing to consider allowing people, or even supporting them, to relocate to a desired location and work from there. A few years ago, we identified a trend of "self-initiated" relocations within global mobility programs (we called them "hand-raisers") and they continue to be out there on the talent mobility radar. Many companies have created separate policies or tiers within their policies for these types of moves so that they can keep the talented people they have invested in.

So, where would you move to if you were free to settle into any city around the world? The Harvard Business Review published an article entitled, "The Most Attractive Cities to Move to for Work" that highlighted the research done by AIRINC.

This year's AIRINC Global 150 Cities Index is out. This ranking combines local salary levels, tax rates, living costs and living conditions to assess the attractiveness of each location. Each city is assigned a score based upon the net purchasing power, and this score is used to determine the financial ranking of the cities. The information can be sliced and diced. Let's consider how locations did from a tri-regional perspective.

EMEA also dominated the "Happiest Countries in the World" rankings this past year as well. We will have to watch and consider how regional economies and politics impact both of these ratings.

Where would you choose to live?

If you were free to settle in any city that had the right financial rewards plus a great lifestyle, where would you go? As featured in the Harvard Business Review, AIRINC's Global 150 Cities Index highlights the cities that have the ideal combination of high salaries, low taxes and costs, and quality of life. 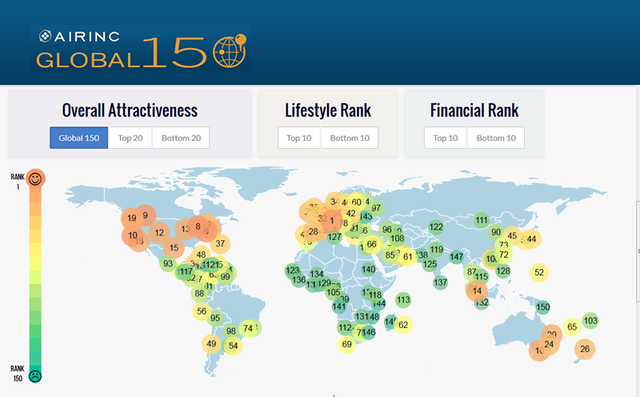 Here are 11 reasons to live abroad (when you are ready!)
Chris Pardo

Has COVID-19 "put a fork" in the long-term assignment?
Chris Pardo
Recent posts from Plus Relocation