Despite the drop in value of the GBP, London tops the list for the most expensive expatriate accommodations across Europe in the ECA International accommodations report.

It costs £5,398 per month in London compared with £1,427 per month in other major UK cities and some £3,693 more expensive than the average monthly cost in all of Europe.

The next five spots all jockeyed around:

7.) Paris actually dropped a spot from being sixth

8.) Dublin made the biggest jump - up three spots from eleventh

9.) Amsterdam moved up one place

According to ECA International, Eastern European cities have also seen sharp increases in rental prices by almost £2,000 per month with both Prague and Warsaw climbing over 10 places in the rankings compared with last year. "International companies are setting up or expanding their operations in these economies, bolstering demand for quality accommodation," explained Alec Smith.

Global mobility teams are considering these costs not only on a per assignment basis, but also projecting the impact on their overall expatriate assignment costs for 2018.

“The biggest rent increases in the UK have been in Manchester, Edinburgh and Glasgow due to high demand for rental property. In Aberdeen, the downturn in the oil and gas industry means that many employers are returning staff back to their home locations - and their healthy rental budgets along with them - meaning the Aberdeen rental market has suffered a downturn of 16 percent” Alec Smith, Accommodation Services Manager, ECA International ” - Alec Smith, Accommodation Services Manager, ECA International 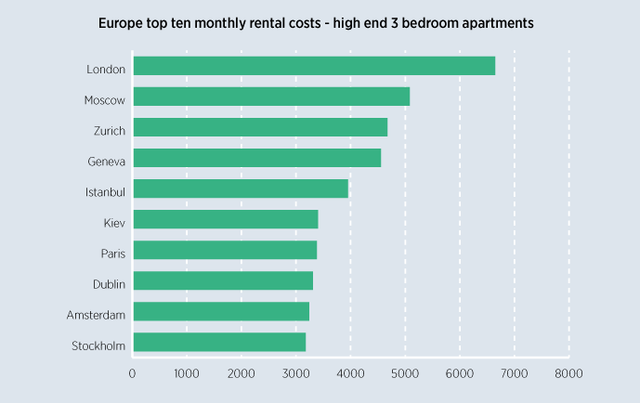