According to InterNations survey data from their 2017 Expat Insider report, the United States ranked 41st as a top destination according to expats themselves. The top 10 countries per expat interviews were:

Others out in front of the U.S. were Vietnam, Oman, Ecuador and Kazakhstan! The year prior, the U.S. ranked 35th. So, what makes the U.S. such a challenging country for incoming expats?

Part of the challenge could be that the United States is a massive country that is regionalized from a cultural perspective. The map in this article shows the U.S. really has 11 separate 'nations' with entirely different cultures. These 11 sub-nations impact the expat experience and make cities across the country very different from one another. The first idea of these 11 sub-nations were proposed in a book entitled, "American Nations: A History of the Eleven Rival Regional Cultures of North America," by Colin Woodard. The book explains that North America was settled by people with distinct religious, political and ethnographic characteristics, creating regional cultures that have been at odds with one another ever since.

The 11 sub-nations have been given names and they are:

Obviously, every city in the U.S. has a unique vibe due to it's history, heritage, culture, topography, weather, real estate market and economy. And, all of these things combine to create some amazing variation with regard to expatriate experiences. Has this impacted your mobility program? Have you had to design or consider specific support for expats moving into a particular area of the United States?

Recognizing the distinct values of each region is critical to understanding the United States, Woodard said. "The country has been arguing about a lot of fundamental things lately, including state roles and individual liberty," Woodard, a Maine native, told Business Insider in 2015. "In order to have any productive conversation on these issues, you need to know where you come from," he said. "Once you know where you are coming from, it will help move the conversation forward." 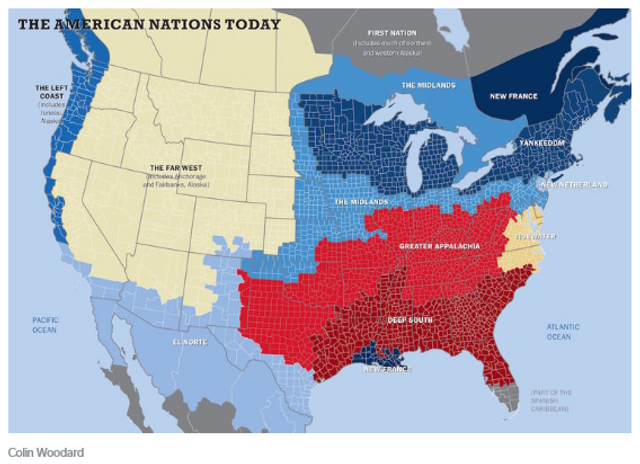 This map shows the US really has 11 separate 'nations' with entirely different cultures https://t.co/AYnf109y77

This map shows the US really has 11 separate 'nations' with entirely different cultures https://t.co/gr8oR4RHoE via @businessinsider

I was just telling someone the other day that I don't really consider most of Texas or Florida as part of the "Deep South;" they're something else.

I think this take is a little closer to the mark: https://t.co/gvQo2SaW8O

This map shows the US really has 11 separate 'nations' with entirely different cultures https://t.co/pSfmMd5E4N via @businessinsider --- The demographic data comparing these 11 nations would be interesting explaining voting habits, income, crime statistics, etc.