A smile can mean something different depending on where you are and what cultural environment you are in.

Shelley Batts explains in her blog post “The Cross-Cultural Meanings of a Smile” that, "In America, a smile is usually regarded as a friendly, positive gesture of trust. Historians have suggested that because the USA was initially a frontier society with little official law enforcement, the ability to communicate that ‘I am a friend’ was quite important. In contrast, among some Asian societies people smile when they are embarrassed, angry, sad, confused, apologetic, and (sometimes) happy. But smiling is seen as a frivolous activity, and smiling for a government document (as in the case of the driver’s license photo) might have indicated that the person did not take the responsibility of driving seriously. A Korean saying even goes, ‘He who smiles a lot is not a real man.’”

Countries like Russia, India and Argentina associate dishonesty with smiling. These countries have cultures that rank lower on a cultural phenomenon known as "uncertainty avoidance" and tend to have instability with health-care, the court system and political environments.  Because of this, they tend to have people that view the future as unpredictable and uncontrollable. A smile makes you look unwise to them or causes them to be suspect, like you have done something untrustworthy.

Polish psychologist, Kuba Krys has found through research, in countries like Germany, Switzerland, China, and Malaysia, smiling faces were rated as significantly more intelligent than non-smiling people. But in Japan, India, Iran, South Korea, and Russia, the smiling faces were considered significantly less intelligent. Even after controlling for other factors, like the economy, there was a strong correlation between how unpredictable a society was and the likelihood they would consider smiling unintelligent.

So, be careful where you smile because culture shapes judgments of intelligence and honesty of smiling individuals.

Smiling individuals are usually perceived more favorably than non-smiling ones—they are judged as happier, more attractive, competent, and friendly. These seemingly clear and obvious consequences of smiling are assumed to be culturally universal, however most of the psychological research is carried out in WEIRD societies (Western, Educated, Industrialized, Rich, and Democratic) and the influence of culture on social perception of nonverbal behavior is still understudied. Here we show that a smiling individual may be judged as less intelligent than the same non-smiling individual in cultures low on the GLOBE’s uncertainty avoidance dimension. Furthermore, we show that corruption at the societal level may undermine the prosocial perception of smiling—in societies with high corruption indicators, trust toward smiling individuals is reduced. 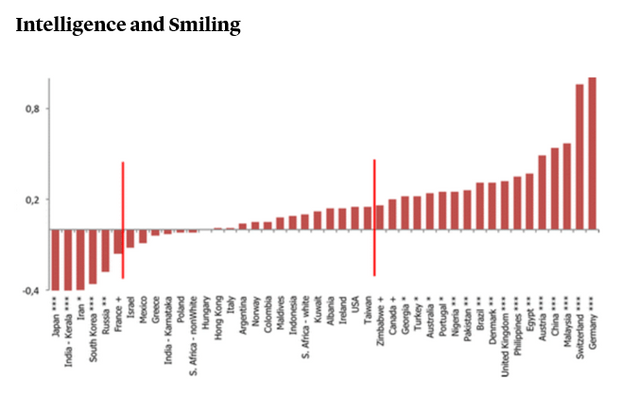