We have been witnessing an increasing preference for rental housing over the last 10 years.  According to Rent Cafe's Blog, 20 U.S. cities made the switch from a homeowner majority to a renter majority over that time, pushing the share of renter-majority cities from 28% to 32%. In fact, renters now make up more than 50% of the population in 82 of the 260 cities they analyzed. In their article, "The Renters' Decade 2010-2019," they share:

"While the recession pushed many to rent out of necessity, the economic expansion which followed, coupled with changing attitudes towards family and homeownership, (led) to the rise of the renter by choice. Rentership rates expanded across the board—from young families to seniors, from city cores to suburbs, many Americans have shifted away from homeownership."

Through 2019, rental prices had seemed to be on a consistent climb up. The latest from Zumper is that the top 10 most expensive rental markets have been impacted by "pandemic pricing" and rents are continuing to drop in most of the locations, as people move out of some of these more populated areas to go to less densely packed satellite neighborhoods. This trend is known as the "Brooklyn Effect," and it is driving rental prices down in the city and up in the suburbs. The term refers to the migration of younger to middle-aged professionals who are priced out of more expensive pockets of a city. Examples of this are top markets like Boston (down almost 2% year-over-year) and San Francisco (down 11.8% year-over-year) versus Providence and Sacramento, respectively, where prices were both up around 5% last month.

Click below to see more related to the top five rental markets and top five locations where rents increased and decreased, or jump into more rental data than you can possibly handle. Might want to bookmark this one!

The top 10 most expensive markets continued to experience pandemic pricing, as the majority of these cities were trending on a downward trajectory last month. As the pandemic persists on, the demand for rentals has continued to shift away from these pricey areas and a significant amount of that demand seems to be moving toward neighboring, less expensive areas. Similar to the trend we saw in New York, the “Brooklyn Effect” has become more pronounced as some of the largest monthly rent price increases in the nation occurred in satellite cities. For example, in our top markets, while Boston and San Francisco rents were on the decline, Providence and Sacramento prices were both up around 5% last month. 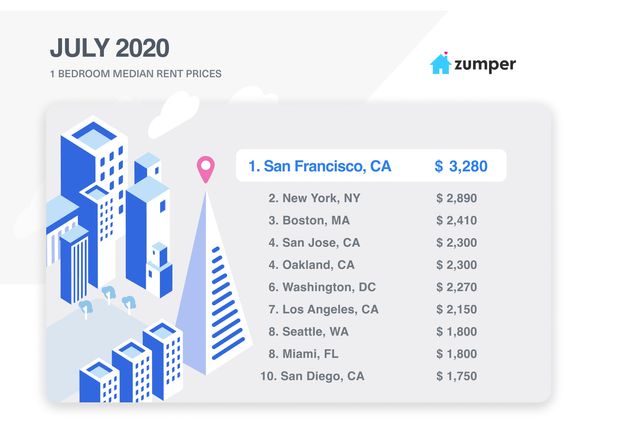 Denver seems to have experienced a significant year to year drop (10%) in cost of a one-bedroom apartment rental. https://t.co/VwlKMzgH3a#copolitics pic.twitter.com/d2emFoqmbU

Don’t see much growth in WNY rents the next few years–Buffalo, NY saw one-bedroom rent fall 3.6%, settling at $1,080, and down 5 positions to become the 44th most expensive market. Two-bedrooms had a more modest decline, decreasing a slight 0.7% to $1,350. https://t.co/y5qXpu7kAA

The cost of a 2-bedroom apartment in Milwaukee has increased 14.7% Y/Y. Doesn't seem sustainable! https://t.co/LA82o8Xpxd

ICYMI: The good, the bad and the latest on the pandemic's impact on global mobility programs
Chris Pardo
Recent posts from Plus Relocation