For 50 years, Employment Conditions Abroad International, aka ECA International, has been focused on creating solutions for companies to effectively move talent around the world. Their first cost of living (COL) survey covered locations across 30 countries but today now covers 493 locations. ECA carries out two main surveys per year to help companies calculate cost of living allowances so that their employees' spending power is protected while on an international assignment.

The latest of their annual cost of living surveys ranks locations as they compare a basket of like-for-like consumer goods and services that are commonly purchased by assignees globally. ECA’s accommodation data is also factored in, comparing rental costs in areas typically inhabited by expatriate staff in over 410 locations worldwide. Curious to compare? Here are a couple of fun charts:

So what were the top ten most expensive cities in the world at this point and how did things change since last year? Well 50% of the the top 10 are in Asia. Only one is in the United States now. Three are in Europe and one is in Israel. This chart shows top 10 as compared to last year. 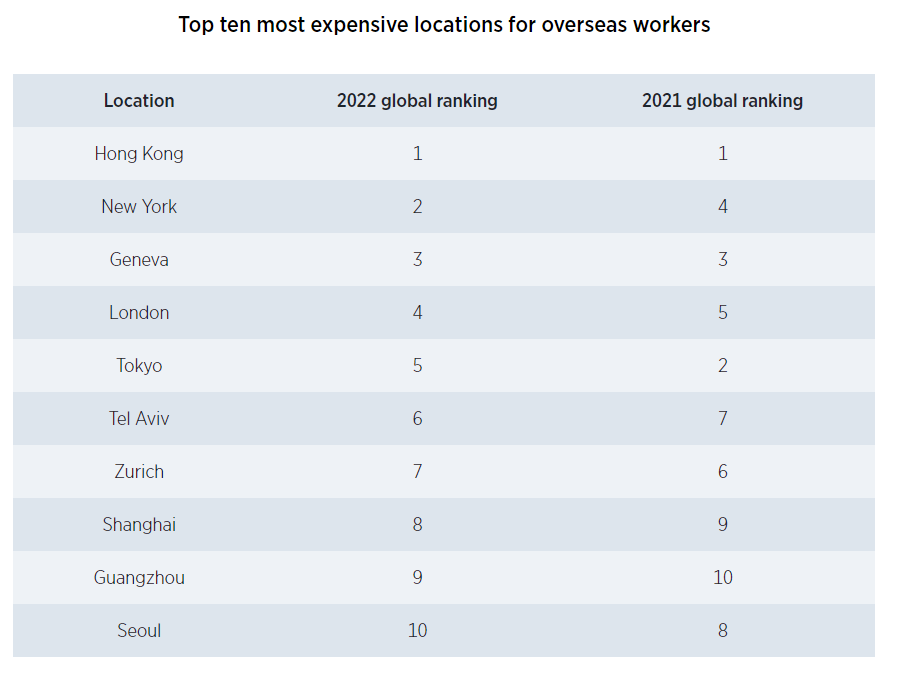 ECA points out a number of global highlights. Most locations within the EU have seen drops in the rankings after an unsteady period for the euro, with Paris falling out of the global top 30 and cities such as Madrid, Brussels and Rome all falling too. Many locations in Asia have witnessed above-trend rates in inflation in the past 12 months. Many mainland Chinese cities have continued to rise in the rankings, with four cities now included in the 15 most expensive cities globally while Shanghai is also now the third most expensive city in Asia after Hong Kong and Tokyo. Singapore’s ranking remained unchanged in 2022 despite significant price rises in the past 12 months, with housing rental costs, utilities and petrol prices seeing particular growth.

As the world moves further into this inflationary period, and maybe into recession, it will be interesting to continue watching these types of survey report findings and to consider the details. Here is an interesting article (Inflation, the Consumer Price Index and Relocating Employees) from MOTUS that takes that conversation a bit further. We know that relocating employees are going to question the cost-of-living in their new cities, so it is important to acknowledge inflation and increasing home prices in many markets. However, it is just as crucial to understand that when prices are increasing everywhere, there may be little to no impact on the difference between locations when relocating. Ultimately, costs are increasing on just about everything and everywhere. They advise that "cost-of-living calculations used for relocation—and paid to employees moving to higher cost locations—measure the difference between locations while national inflation issues should be addressed by an organization’s compensation strategy."

“Although Hong Kong has been impacted by rising global inflation less than other regional and global locations in the past year, it nonetheless remains the most expensive location in the world” said Lee Quane, Regional Director – Asia at ECA International. “Year on year price rises of 3%, as measured by our basket of goods and services, are higher than we typically see in Hong Kong, but are lower than rates in similar cities both within the region and globally. Rather, it has been the strength of the Hong Kong dollar, which is pegged to the US dollar, in the past year which has enabled it to maintain its position as the most expensive location worldwide as other currencies have weakened.” 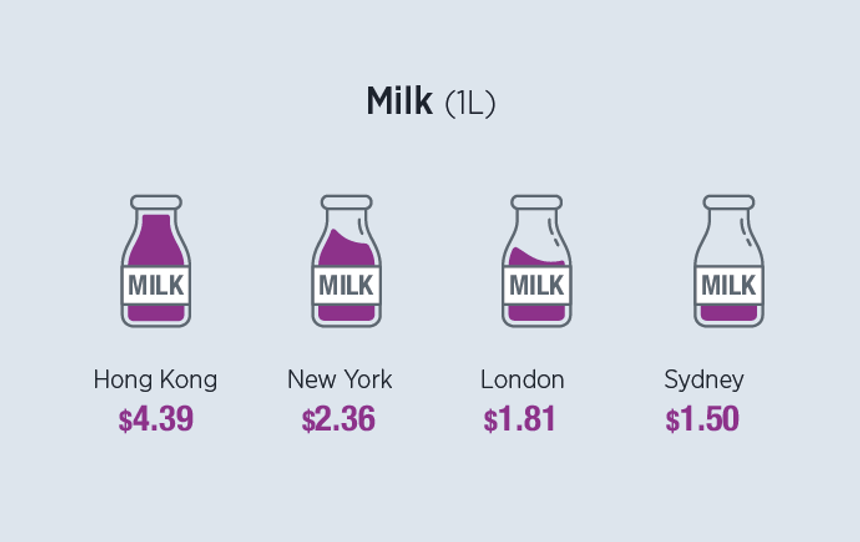 High inflation pushes New York and London up the rankings to second and fourth respectively
Geneva, Switzerland is third in the global rankings, while Tokyo falls to fifth despite higher than usual inflationhttps://t.co/X4kAhv8SV0 pic.twitter.com/Qfw3zcHCYV

Hong Kong the most expensive place to live in the world, huh... Not surprised considering how many people have to live in single rooms.https://t.co/T0UfH9eDKv pic.twitter.com/iN8y2EcovB

These are the world's most expensive cities for 2022.

The list is based on several factors, including the average price of household staples like milk and cooking oil, rent, utilities, public transit and the strength of the local currency. https://t.co/AryBCCUWDT

These are the world’s 20 most expensive cities for expats in 2022 https://t.co/mLsw5lu9id

Hong Kong is once again the world’s most expensive city to live in for expats. Here’s a look at the list. https://t.co/HphRVN39iG

Tokyo has fallen to fifth on a list of the world’s 20 most expensive cities for expats, with all Japanese cities falling due to the weakened yen, while Hong Kong ranked first. https://t.co/HErSuVC1T3

Yikes! Do you have an equity non-compliance problem?
Chris Pardo

ICYMI: Eyes up! It's a new year and things are changing!
Chris Pardo

WHERE WOULD YOU GO? (Or where wouldn't you go?)
Chris Pardo
Recent posts from Plus Relocation