There are some interesting insights in the latest National Movers Study from United Van Lines, which is the 45th edition of the report. The study shares not only the company’s exclusive data for customers’ state-to-state migration patterns but also captures the motivations and influences for these moves. Let's dig into a few of the interesting revelations captured in the report.

The "where" of it: departure and destinations

These states had the greatest number of moves out of them: California (15,836), Texas (10,357) and Florida (7,978). The states with the greatest percentage of outgoing volume were: New Jersey (71%), Illinois (67%) and New York (63%). New Jersey has held this top spot for the last four years. Nine of the top 10 outbound states are considered densely populated, further illustrating the shift to less crowded states.

The "why" of it: reasons for moving

Elements playing into the movement are a desire to leave high-density areas due to concern for infection, a desire to leave high-cost locations and gain a change in lifestyle and improved financial situation, and the ability to do this because of the transformation of how we are able and willing to let employees have more flexibility to work remotely.

This year’s survey results indicated that 31.8% of Americans who moved did so in order to be closer to family – a new trend coming out of the pandemic as priorities and lifestyle choices shift. Additionally, 32.5% of Americans moved for a new job or job transfer, a significant decrease from 2015, when more than 60% of Americans cited a job or transfer.

Check out which states ranked highest for these reasons:

Per information sent to Plus Relocation by Unigroup, “This new data from United Van Lines is indicative of COVID-19’s impact on domestic migration patterns, with 2021 bringing an acceleration of moves to smaller, midsized towns and cities,” Michael A. Stoll, economist and professor in the Department of Public Policy at the University of California, Los Angeles, said. “We’re seeing this not only occur because of Americans’ desire to leave high density areas due to risk of infection, but also due to the transformation of how we’re able to work, with more flexibility to work remote.”

ST. LOUIS – Jan. 3, 2022 – United Van Lines released the company’s 45th Annual National Movers Study today, which indicates Americans were on the move to lower-density areas and to be closer to their families throughout last year. The annual study, which tracks the company’s exclusive data for customers’ state-to-state migration patterns, determined Vermont as the state with the highest percentage of inbound migration (74%) with United Van Lines. South Dakota (69%), South Carolina (63%), West Virginia (63%) and Florida (62%) were also revealed as the top inbound states for 2021. Meanwhile, states like Illinois (67%), New York (63%), Connecticut (60%) and California (59%), which have regularly appeared on the top outbound list in recent years, again ranked among states with the largest exoduses. 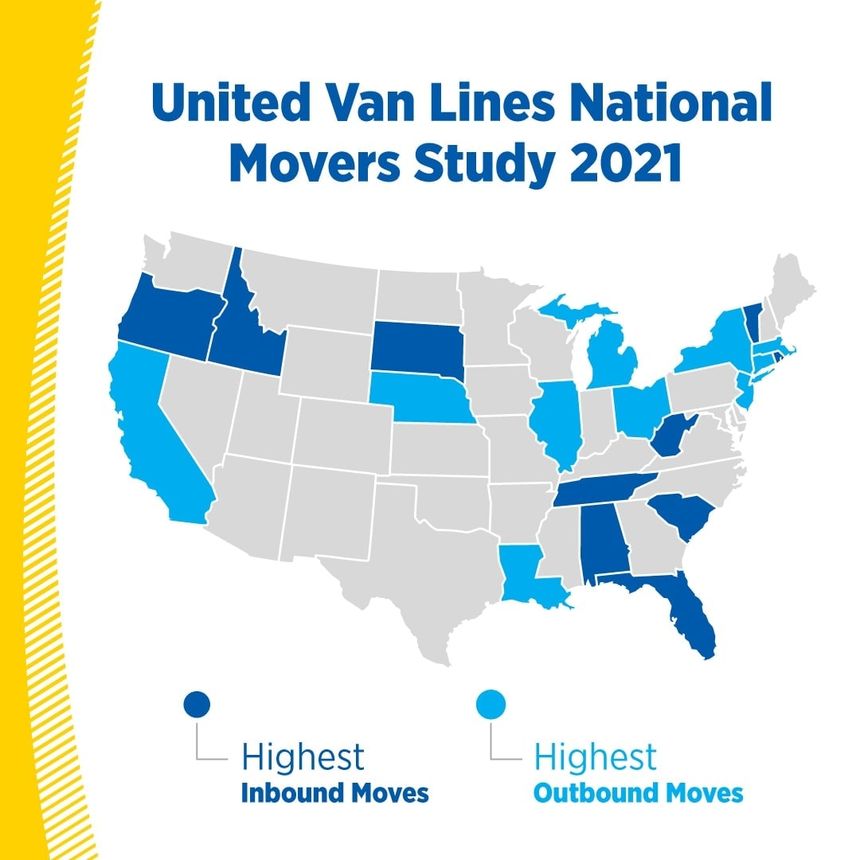 Another study showing that NJ is #1 in people moving out of state for a variety of reasons. https://t.co/fZYP85KQSS

What has changed with international mobility policies?
Chris Pardo
Recent posts from Plus Relocation

Inflation is very much a global issue
Joe Benevides

Maybe we should call it the "Great Reassessment?”
Susan Benevides
repost  cancel