When looking at the overall cost of an expatriate assignment, you need to look at three main elements: the cash salary, benefits - such as accommodation, international schools, cars, cost of living allowances - and tax! Every year, ECA conducts its MyExpatriate Market Pay Survey of pay levels for expatriates around the world, which includes benefits, allowances, salary calculation methods, and tax treatment. The results, free to participants, enable companies to benchmark their expatriates' actual salaries against the market. More than 300 companies took part in the survey covering over 130 countries and over 10,000 international assignees.

Let's start with the fact that all locations in the region saw an increase in the pay packages for expatriate staff! But when looking specifically at the APAC region, Japan came out on top as the most expensive location in the region. India and Mainland China followed closely while locations like Singapore, Malaysia (the lowest cost location in the region) and Hong Kong have dropped further down on the list. Markets such as Thailand, Vietnam, and Taiwan also witnessed relatively cheaper expat package for hiring middle managers.

In addition and according to the report, elsewhere, Australia and New Zealand both saw significant rises of 8 and 16 positions in the global rankings to 7th and 13th place respectively, owing to a variety of reasons including the strengthening of their currencies, increased benefits costs, and income tax changes in the past 12 months.

With inflation being felt everywhere, in many cases to levels not seen for decades, many expats and mobility programs have wondered why if costs are going up their cost of living allowance has not gone up. Despite rising inflation many assignees will have seen their cost of living indices remain relatively stable or decrease. This blog post will explain why but the simplest answer is that it is because the costs went up in your home location as much or more in some cases!

For some additional "food for thought" as it relates to costs around the world that impact talent mobility try, "The world's most expensive cities for expatriates in 2022 (at this point)".

They are Japan, India, and Mainland China. Meanwhile, markets like Singapore, Malaysia, and Hong Kong are relatively cheaper. The cost of hiring an expatriate middle manager in Singapore is relatively cheaper than in other markets like Japan, India, and Mainland China, according to mobility solutions company ECA International's latest MyExpatriate Market Pay Survey. This is despite the cost of an expatriate package - comprising salary, benefits, and tax - in Singapore (in SGD) witnessing a 4% rise in 2021. Report analysts dubbed this as a "modest" growth, considering the local market is the 13th most expensive city in the world for overseas workers. That said, Lee Quane, Regional Director, Asia, ECA International explained once package value is converted into USD, the cost rose by a total of 10% - which is considered "significant" compared to the year before. 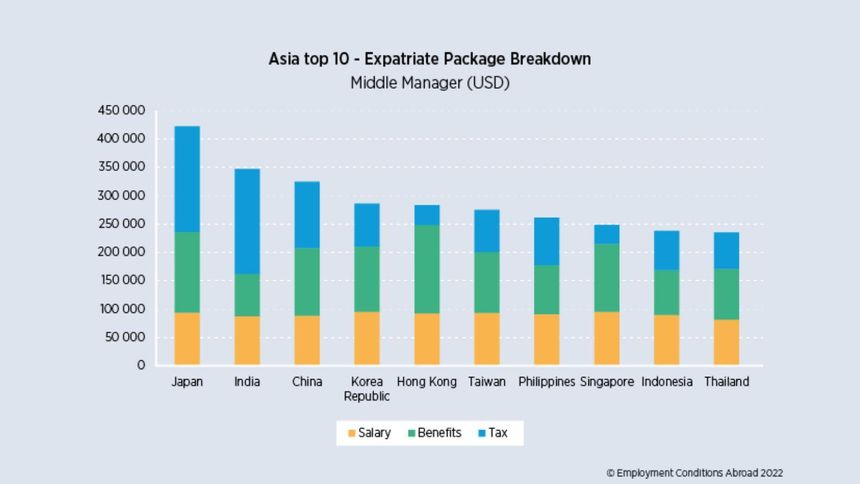 Findings of the latest MyExpatriate Market Pay Survey published annually by ECA International claimed that Malaysia retained its position as the cheapest location in Asia to hire an expatriate in 2021 #survey #expatriates #talent https://t.co/XAEVE93ldP